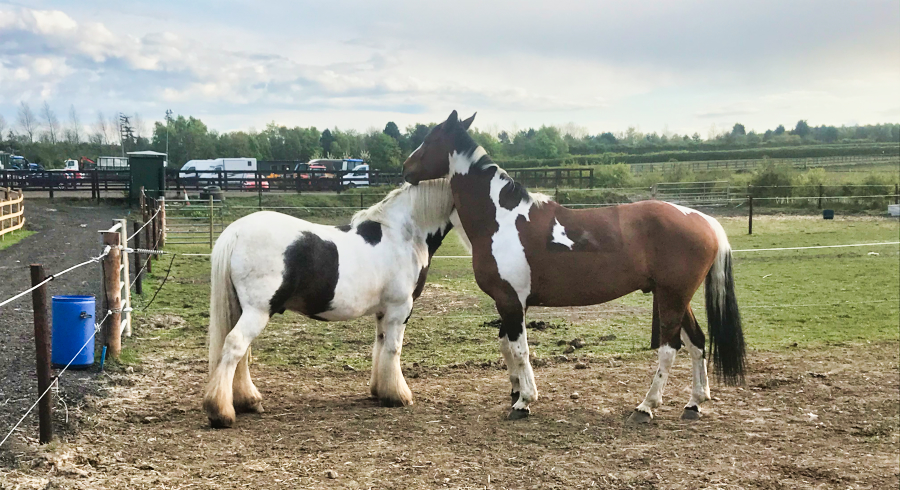 I hope everyone is safe and well at home during this unusual time!! My yard locked down a little earlier than most on 17th March. We haven’t been able to have lessons since, or have anyone on the yard that isn’t a vet or a farrier. We’ve been the lucky ones though as we have still been allowed to come twice a day to care for our horses and ride. We have all agreed a rota system so we aren’t all there at the same time but we don’t have any huge restrictions on us, which has been amazing. Everyone is being very sensible and helping each other out where we can.

I decided I was going to use lock down to crack the lateral work with Merlin. It’s something we have always struggled with and I thought with no competitions coming up, it was the time to get going with it. We were just beginning to get to grips with the travers in walk and canter and his shoulder in was pretty spot on! Then on 3rd April I brought him in from the field and noticed a small amount of blood on his back left leg. He had a tiny wound (I’ve popped a picture in so you can see it) but it seemed fairly superficial. He was sound and there was no swelling and as it was after 6pm I thought it would be ok to leave until the vet was back on normal hours the next morning. I’m lucky – my vet practice work Saturdays! 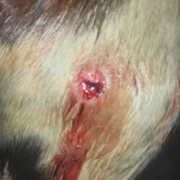 I gave the vet a ring on the Saturday as a precaution and she suggested I brought him up for a check over. Obviously with the Covid situation I couldn’t go in with him and just had to hand him over at the door. When she came back out and said he needed surgery I was gobsmacked. Apparently the wound had punctured the tendon sheath and they were worried it would become infected and the infection would get into the hock joint. I asked my regular vet Ed to give me a second opinion, which he did, and then drove Merlin down to Oakland Surgery in Yarm for the operation. The operation went well and he spent the next 6 days recovering until the watchful eye of surgeon Ann. I can’t thank her enough for how well she cared for him and kept me updated throughout, as I couldn’t visit him at all with the current lock down. 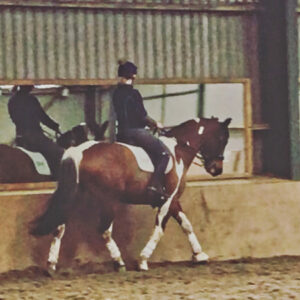 I went to collect him on Thursday 9th April having been at work all day (I am a teacher so I am in every few weeks looking after key workers’ children). I was dreading the box rest as Merlin is not the most settled in his stable. My vet Ed from Aln Northumbria came out to change the bandage the next day and we discussed how we could manage his box rest. We agreed it was best to keep him in 24/7 for the first week until the large bandage came off and then we could turn him into half a small paddock for a couple of hours a day to keep him happy. Merlin was sedated for most of the first week and managed fairly well considering. However once he was turned out for a small period he became more tricky in his stable and had his stable wall down two days in a row. I made the difficult decision to turn him out 24/7 into a small paddock with my friend’s cob as a companion (see photo at top of the page). 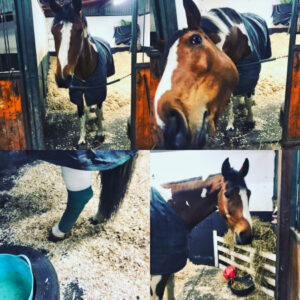 Since then he has been super chilled and has gone back to being a really pleasant horse to deal with. I got back on him on 1st May for the vet and they were happy he was completely sound. We’ve since been walking under saddle twice a day and he gets his next check up on 15th May to see if he can begin some trot work. I cannot thank my vet, Ed Shinn, enough.

He has been on the end of the phone throughout, even organising on a Saturday night for me to drive to the vet on call’s house to collect antibiotics when his leg swelled and messaging me on a Sunday to ask how he is. It’s so important to have a vet that you can trust completely and I am very lucky to have that! He really cares about my horses and makes me feel like they are as important to him as they are to me.

Obviously Merlin was supposed to be at the National Finals at Easter. I actually collected him from Oaklands Surgery the day I was supposed to leave for Hartpury. I feel lucky in a way that everything has been cancelled and the Nationals are going to be rearranged so we will still have our chance to dance down the centre line. Merlin has been very lucky, Ed is confident he will make a full recovery and he feels super strong.

Life feels completely upside down at the moment. I’m teaching from home, which I never thought I would be able to do, and I’m missing my students. Being in school is very strange, the halls are quiet and you miss the bustle and chaos of normal school life. 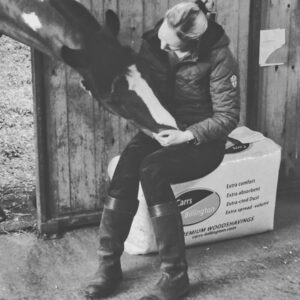 My grandparents are shielding due to their age, as is my dad as he has no spleen so his immune system is the penicillin he takes every day. It’s scary times and I can’t see it being over anytime soon. Everyone is handling it in their own way and I don’t think we should be judging anyone. I’m trying to carry on as normally as I can, whilst keeping two meters away, and to not panic. But every now and again it catches up with you and I have had a few wobbles. I’m lucky, I have the horses and dogs to keep me sane and I’m just praying we get this under control so our lives can get back to normal soon.

This website uses cookies to improve your experience while you navigate through the website. Out of these, the cookies that are categorized as necessary are stored on your browser as they are essential for the working of basic functionalities of the website. We also use third-party cookies that help us analyze and understand how you use this website. These cookies will be stored in your browser only with your consent. You also have the option to opt-out of these cookies. But opting out of some of these cookies may affect your browsing experience.
Necessary Always Enabled
Necessary cookies are absolutely essential for the website to function properly. These cookies ensure basic functionalities and security features of the website, anonymously.
Functional
Functional cookies help to perform certain functionalities like sharing the content of the website on social media platforms, collect feedbacks, and other third-party features.
Performance
Performance cookies are used to understand and analyze the key performance indexes of the website which helps in delivering a better user experience for the visitors.
Analytics
Analytical cookies are used to understand how visitors interact with the website. These cookies help provide information on metrics the number of visitors, bounce rate, traffic source, etc.
Advertisement
Advertisement cookies are used to provide visitors with relevant ads and marketing campaigns. These cookies track visitors across websites and collect information to provide customized ads.
Others
Other uncategorized cookies are those that are being analyzed and have not been classified into a category as yet.
SAVE & ACCEPT